“There’s nothing more exciting than something you don’t know!”

Eric Mottram (in whose case it was remarkably little)

TO THOSE WHO ATTENDED THE ERIC MOTTRAM MEMORIAL CONFERENCE: The edited first hour of his 1971 American Imagination of Synthesis seminar is HERE. The text of my introduction is HERE. For those who did not attend and are interested, the programme is HERE.

In 1966 I was on the American Embassy’s list of available speakers on American cultural topics. Elizabeth Singleton in the Cultural Affairs office phoned me and asked if I could do a talk on the San Francisco beat poets. I said I’d love to, and would like to do it like a radio documentary with lots of recorded examples and linking commentary in between, but I no longer had the materials.

“Let me introduce you to Eric Mottram,” she replied, “he’s the best! I read American Lit with him at Kings. He has lots of recordings and he’s always helpful. Come around to the embassy for lunch and I’ll introduce you.”

The rest, as they say, is history. Lunch stretched to a three-hour conversation in which he offered exactly the material I wanted, including recordings that had been made for and at KPFA – stuff I had long been familiar with. Mutual passions ripened into friendship and he was best man at Mary’s and my wedding in 1968.

Eric knew more about American culture, both past and present, than anyone I’d ever encountered on either side of the Atlantic. He became my mentor, in fact my guru. (I dislike the word, but it conveys the reality more succinctly than any other.) Ultimately I enrolled in the Institute of United States Studies to do an M.A. with him, not as part of a career plan, but simply to get my mind stretched.

His seminar that year was titled “The American Imagination of Synthesis”. It introduced us to a series of interlocking selections that included such unlikely but enlightening juxtapositions as Norman O. Brown, William Burroughs, Ezra Pound, Norman Mailer, Alfred Korzybski, Ludwig Wittgenstein and Wilhelm Reich. (The latter’s The Function of the Orgasm was an education in itself – a nobly romantic work whose seminal (!) value extended from the classroom to the bedroom.)

Over the next two years I recorded virtually every lecture and seminar Eric presented, both at the Institute and at King’s College – countless hours of unique insights into how much happier and better the world could be than the mess we had inherited.* Without this website, which I have now begun to put together, what would happen to these tapes? All over Europe and America, official archives are so strapped for money that they can no longer afford even to give storage space to private collections, let alone catalog them and make their contents accessible to scholars. For instance, a virtually complete private collection of mint condition classical LPs from well over half a century was recently disposed of piecemeal through Oxfam because no institution was prepared to accommodate it!

And so I decided to spend much of 2015 digitizing my personal Eric Mottram archive and making it publicly available. I offered to do the same for King's College -- a bequest had been offered to get the long process under way -- but the usual red tape requires that the work be done by a vat registered commercial firm already on their books who are totally unfamiliar with the material and charge three times my hourly rate. Attempts to get the work started, and the endless correspondence, have been dragging on for months. Here's a depressing sample.

At least two of these tapes have already had a public hearing. In 1982 both of my Eric[k]s were in London at the same time and I got to introduce them to each other. They came to my studio on November 2nd and Erik Bauersfeld, who was drama and lit director at KPFA, interviewed Eric Mottram for KPFA broadcast with occasional interruptions from me in the control room. (They were having so much fun I couldn't stay out of it!). In this exchange between two compulsive and eloquent communicators, Eric Mottram's contageous enthusiasm comes across as vividly as in all those seminars so deeply etched in my brain. Can such sheer mental and spiritual energy ever dissipate?

Eric then stayed on to record one of the very few poetry readings he was ever able to do under studio conditions.

When Eric died in 1995, his enormous archive went to Kings College. Poet Bill Griffiths was hired for a couple of years to put it in order and partially itemize it, but then the money ran out. If you Google Eric’s name, most of the online recordings of his voice, whether in lecture, interview or poetry reading, are those linked to here on this website. History? It’s so yesterday!

In 1995, Peterjon and Yasmin Skelt put together a festschrift, Alive in parts of this century: Eric Mottram at 70 (click on Erik's picture at the top of this site to see the cover). I had the honor of leading it off and Mary ended with a recipe for Rhubarb Breakfast Crumble:

"Eric says he has rhubarb for breakfast. However, when dinner guests eagerly accept second helpings of a gournet concoction of chicken, limes and coriander, he has been heard to exclaim, 'Oh NO! I was hoping to have some of that for breafast!'"

As a brief summary of who and what Eric was, I can’t improve on what I wrote almost two decades ago: 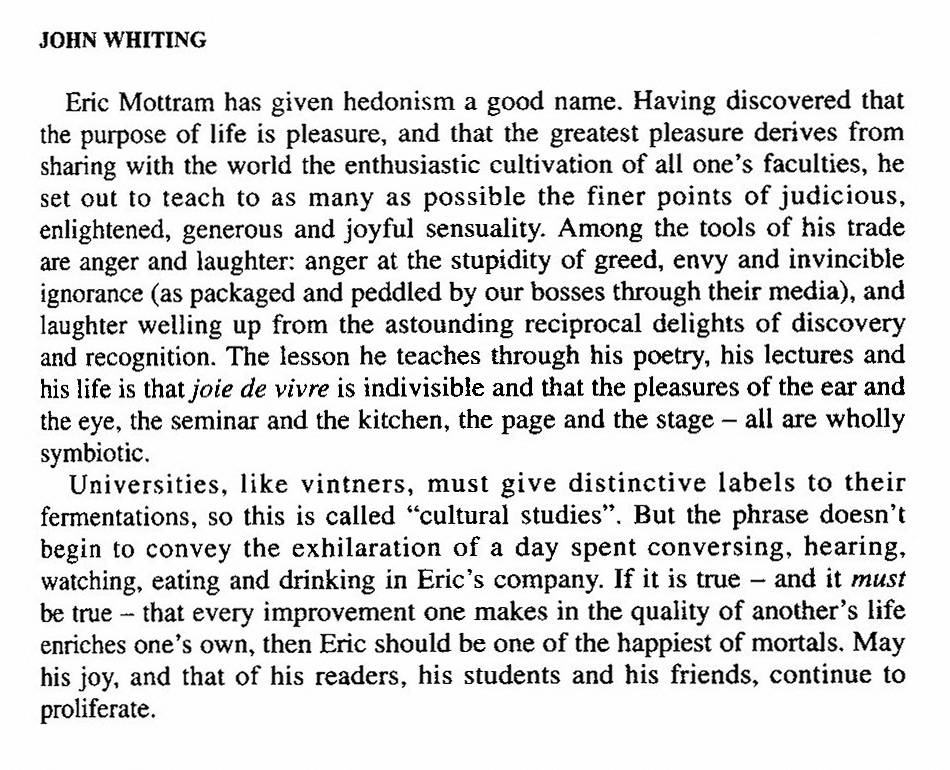 Eric survived his 70th birthday by less than three weeks, dying on January 16, 1995, just a few days after I had brought him together over dinner with John Kenny and just two days after my own 64th birthday. When Mary drove Eric back to the tube station he exclaimed, "I've never met an intelectual trombonist before!"

On March 3 there was a public celebration of his life held in the Kings College Chapel, in which a selection of poets, musicians and friends paid him a memorably creative collective tribute. No institution, including King's, expressed an interest in my recording of the event and so it sat idle for fifteen years until I finally made it public in another website. It consists of the following; to listen to each item, click on the preceding number:

1 Introduction and links by William Rowe

3 Reading by Jerome Rothenberg (recorded for the occasion in America)

8 Reading by Thomas A. Clark

11 Improvisation, trombone and electronics, by John Kenny and John Whiting, who introduces it

12 Recorded interview with Eric Mottram, who opens with a description of his one-sided conversation with a bear

13 A memorable poem, composed for the occasion, by Jeff Nuttal

Three years later, there was an official opening of the Eric Mottram Archive, with a lecture by the distinguished Harvard aesthetician, Professor Stanley Cavell. His talk, Identifying Praise: in moments of Henry James & Fred Astaire (click HERE to listen), included extensive excerpts from old films. There was an ominous prognosis for the archive's future in the fact that his VHS tape containing the selections was in the American NTSC format, which resulted in a highly distorted image when played on the Pal VHS projector.

John Kenny and I took part in the evening's programme, which began with a recorded presentation of John's setting of poems from Eric's A Book of Herne (click HERE to listen). There are extensive notes and a complete text in the printed programme (click on the blue cover, above right). The evening ended with one of the longest improvisations that John and I had ever performed (click HERE to listen). It was one of our best; sadly, it was to be our last. We never did another duo recital.

The Eric Mottram Archive Catalog as assembled by Bill Griffiths is ON LINE (together with a detailed academic biography in one long unreadable paragraph of fine print). Its contents are still available for examination, but the Department of American Studies which Eric worked so hard to establish was wiped out at a stroke by the College as part of Britain's great austerity drive. There's a furious letter from its Professor Emeritus Clive Bush on the No Cuts at Kings website.

Who understands distinction? Who really cares for art?

Finally, I want to thank Will Rowe, Michael Rhebiniak and Dale Carter, fellow associates and students of Eric and long time friends, for their encouragement and for their reassurance that the time and effort required to raise these ghosts and send them soaring through the ether will not have been wasted.

* Listening again to these seminars from over forty years ago, I've come across a brief analysis of Luciano Berio's Sinfonia for eight singers and symphony orchestra. If I had known at the time that throughout the 90s I would mix over thirty performances of this work with orchestras all over Europe and America . . .

John Whiting can be reached HERE